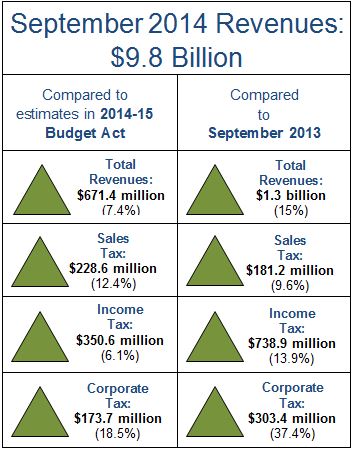 California's economic growth propelled revenues higher in September, while spending remained in check. The bottom line was that the State made further progress along the path toward financial health. Read more and see detailed receipts and disbursements.

Controller John Chiang writes about his newly launched bythenumbers.sco.ca.gov, which makes it easier for public officials and citizens to look up data, download raw numbers, create charts and search for other financial data by offering dropdown menus that allow users to drill into more specific financial information. Read more of the Controller's column.

More on California Fiscal Policy: Paying for Bondage - Market Rates Are Down

Earlier this month, the State Treasurer issued his annual debt report with good news for the State. Read more about fiscal policy.

In August, California created more jobs than any other state, with an increase of 44,200 positions.This gain was about twice that of No. 2 Florida (+22,700), or No. 3 Texas (+21,100). The state has outperformed the U.S. in terms of year-over-year job growth for 30 consecutive months. Read more and see the data.