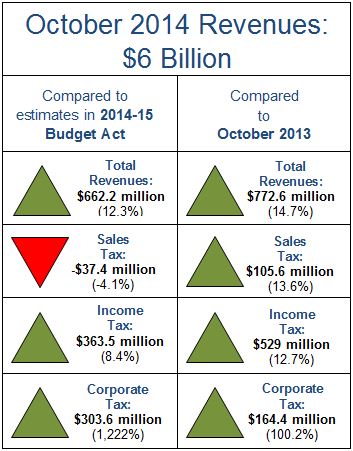 October left California with treats instead of tricks this year. Revenues totaled $6.0 billion during the month, beating estimates produced by the Department of Finance (DOF) for the 2014-15 Budget Act by a hefty 12.3 percent. Read more and see detailed receipts and disbursements.

Using the Governor's current long-term forecast, let's take a look at how much Proposition 30 adds to the State’s General Fund resources. Read more about fiscal policy.

Ten of California’s major metropolitan areas have now recovered all of the jobs lost relative to the peaks reached prior to the last, severe recession. Read more and see the data.